WINDSOR, NS — Buried beneath the oldest wooden blockhouse in North America are the ruins of a church that was destroyed to make way for a military encampment.

Dating back to the 1700s, Fort Edward National Historic Site in Windsor is well known for its role in various war-related historical events and its participation in the creation of the oldest agricultural fair in North America. His role in the expulsion of the Acadians, however, is often overlooked or merely mentioned in passing.

But the region has a lot of meaning for the Acadian community. 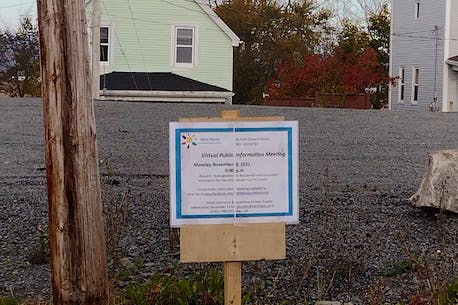 Marie-Claude Rioux, executive director of the Acadian Federation of Nova Scotia, wants to see the history of her people better highlighted. She is concerned about plans by the Regional Municipality of West Hants to sell land adjacent to the fort site for apartment development.

“What we fear, at this time, is that by selling the lots adjacent to Fort Edward itself, we are losing – again – part of our history,” Rioux said.

In the 1680s, French farmers began moving into communities that would later become known as the West Hants. They dammed the tidal marshes along the Avon River and farmed the area. They forged strong relationships with the local Mi’kmaq. In 1722, they built Notre-Dame-de-L’Assomption in Fort Edward Hill, one of the two Acadian parishes in the region. The other was Sainte-Famille in Falmouth, which was built in 1698.

According to the results of a Phase 1 Archaeological Resource Impact Assessment by Jonathan Fowler, the arrival of the British military presence has upset the status quo. Fowler’s summary noted that in 1750 Charles Lawrence established Fort Edward on the site of the parish church of Notre-Dame-de-L’Assomption.

“The British deported 981 Acadians from Pesikitk in 1755, using Fort Edward as a base of operations and prison,” the report read.

New England immigrants, often called planters, settled in the area after the expulsion of the Acadians, settling on land that was once farmed by the French.

Fowler noted that in 1997, “Parks Canada archaeologists conducted cultural resource management excavations under the floor of the blockhouse and exposed a layer of damaged charcoal and burnt cob from the trench in which the foundations of the blockhouse blockhouses had been laid”.

Due to the presence of cob, archaeologists believe it predates the mass deportation of the Acadians and likely represents part of the church that was destroyed. The site is located approximately 30 meters from the north end of the property that West Hants is seeking to sell.

If a priest’s house was located near the church, as was the case at St-Charles-des-Mines in Grand-Pré and the mother parish of St-Jean-Baptiste in Port-Royal, the location is unknown at this time. Moreover, the proof of an Acadian cemetery there “is also an open question”.

However, the Acadian connection could be an important tourism driver since the Acadian population shows “a high degree of interest in heritage and genealogy. The presence of a church site at this location represents an important cultural resource and a potential driver of additional visitation to Fort Edward National Historic Site,” its report notes.

Fowler presented his findings to West Hants council on March 8 and spoke of Fort Edward’s “narrative richness” and “connections to major world events”, the Acadian diaspora being one of many.

Rioux was very interested in the report and presentation and attended the whole session committee in person. She says people are just beginning to realize the true extent of what has happened to Acadians in Nova Scotia.

“You have to understand that historically, Acadians were forbidden to learn French and to have French schools. On top of that, (learning about) history was forbidden,” she continued.

“We are just beginning to learn more about our history,” she said, noting that Fort Edward plays a role in understanding what happened centuries ago.

“It’s a piece of the puzzle that is so important to the telling of Acadian history, the importance of the Acadian people in the founding of Nova Scotia and Canada.”

Following the March 8 Committee of the Whole, Rioux wrote to the municipality expressing the federation’s desire to see the lands owned by the municipality be considered for community use instead of being sold for profit. The land in question was once home to Windsor’s outdoor swimming pool.

Part of the federation’s mandate is to safeguard and promote the cultural heritage of their ancestors.

“As you are no doubt aware, the Windsor to Digby region of the province has a network of historic sites that tell the story of the Acadian people, from their initial settlement to the deportation and beyond. Fort Edward is an important part of this chain of our history,” she wrote to the council, noting that the federation is concerned that if the municipality sells the former pool site without further archaeological investigation, it “would lead to another case the presence of our people on these lands is simply obliterated.

In an interview, Rioux said there is a real opportunity to work together to develop the Fort Edward site and that the federation would be willing to get involved if the council changes its mind about selling to a developer.

“I think it would be quite sad to see that the public lands, surrounding Fort Edward, which we know are probably very rich in artifacts and parts of history, would just be sold off to build apartment buildings. without further investigation,” Rioux said.

She said the area is poised to become a bigger tourist destination if the community and the council invest in it.

In 2024, the World Acadian Congress in Nova Scotia will be held in the southwestern part of Nova Scotia and Rioux said Acadians will want to travel and visit sites that have special meaning – like Grand Pré, Port Royal, Fort Anne and George’s Island in Halifax.

“And why not Fort Edward?” It’s in the same network,” Rioux said, noting that the property deserves to be included in the Acadian narrative.

“I think this is another opportunity the council would miss, really, by not providing the proper amenities in Fort Edward. There are not even toilets. For me, you have to start with that and then build on it.

In a previous presentation to council, members of the West Hants Historical Society indicated that they would like to build a museum or tourist facility on the land the municipality is seeking to sell to tell the full story of the site. It would be a facility that offered restrooms – which they said would attract more tourists.

Long Branch officials are asking a judge to help stop unauthorized pop-up parties like the one that drew 5,000 people to Pier Village on May 21. A motion filed in Monmouth County Superior Court asks a judge to issue a restraining order against six named individuals who promoted another pop-up party in Long Branch on […]

NEW BRUNSWICK – Rutgers University has settled a lawsuit brought by a parent who objected to payment of full tuition and fees for on-campus in-person learning during the spring 2020 semester, when all courses have been delivered online. The university was forced to close most in-person classes at the start of the pandemic in March […]

A solution to a localized flooding issue that plagued residents of East Old Cumberland and King Streets between South Eighth Street and South 15th Avenue in South Lebanon Township was presented at the May 24 supervisors’ meeting. Dan Lyons, director of programs for the Lebanon County Redevelopment Authority, presented the details of Avon’s stormwater improvement […]